2301A Load Sharing and Speed Controls

2301A Load Sharing and Speed Controls

Long established as one of Woodward’s most successful speed control options, the 2301A and 2301A LSSC products control the speed and load of diesel or gas engines, or steam or gas turbines. For OEM applications, consider the advantages of modern digital technology, including the 2301D controls.

The 2301A Speed Control controls the speed or load of diesel or gas engines, or steam or gas turbines. The unit provides control in the isochronous mode, with droop available through an externally-wired potentiometer. The isochronous mode is used for constant speed of the controlled prime mover as long as it is able to provide power to satisfy the load.

2301A LOAD SHARING AND SPEED CONTROLS

The 2301A Load Sharing and Speed Control with Temperature Limiting or Process Limiting, is used in electric generator systems for which load sharing is desired. It can be used with diesel or gas engines, or steam or gas turbines, and is compatible with all Woodward electronic controls. 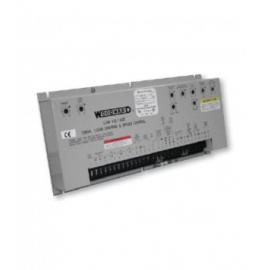